ProtonVPN is a VPN service that is attracting more and more attention with each day. This was to be expected when ProtonMail enjoyed such widespread success. People were confident that the VPN solution in the form of ProtonVPN would be just as good, and they haven’t been disappointed.

In ProtonVPN you have a service that offers some of the most secure connections using their Secure Core servers, great connection speeds, and an overall satisfying VPN usage experience.

This Swiss-based VPN has been increasing its user base at a great pace, which prompted us to find out the cause behind it. This ProtonVPN review will show you just how good a service is. 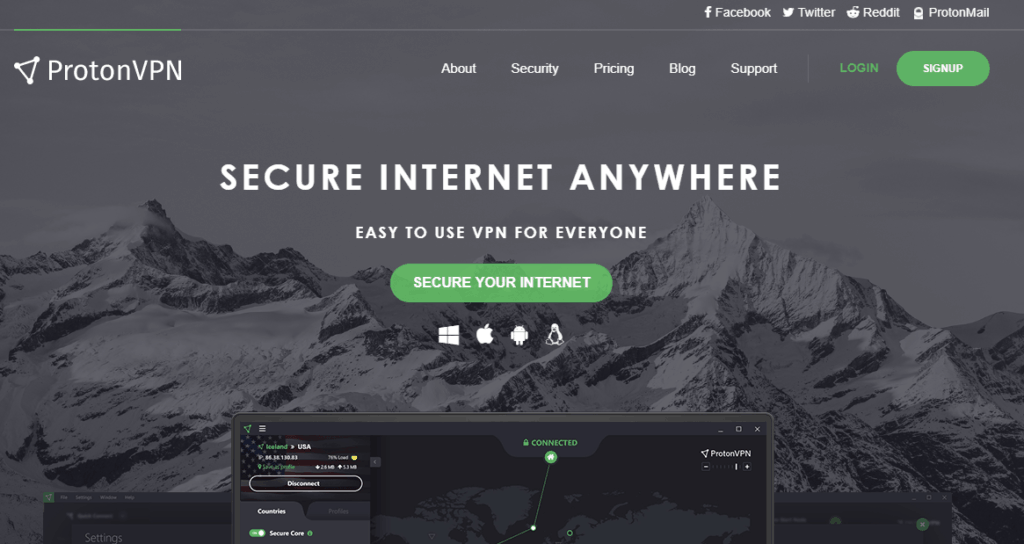 The free package which ProtonVPN offers does not have any limit on how long you can use it, but if you think about it, it leaves a lot of questions unanswered. However, when you do download the VPN client for Windows with the free package, ProtonVPN surprises you by giving you a 7 day free trial of the Plus package. This gives you ample of opportunity to test the service and opt for the Plus or Visionary package should you like the service.

Along with the surprise 7-day free trial of the Plus service within the Windows VPN client, you also have a 60-day money back guarantee with ProtonVPN. Now, money back guarantees that stretch for that long a period is unheard of, and it shows just how confident ProtonVPN are with their work.

When you subscribe to a paid package with ProtonVPN, you will see that there are only two payment options in the form of credit card payments and PayPal. However, you can also make payments in the form of Bitcoins. To do so, you have to donate bitcoins to the service as an individual, and they will be automatically credited to your ProtonVPN account. 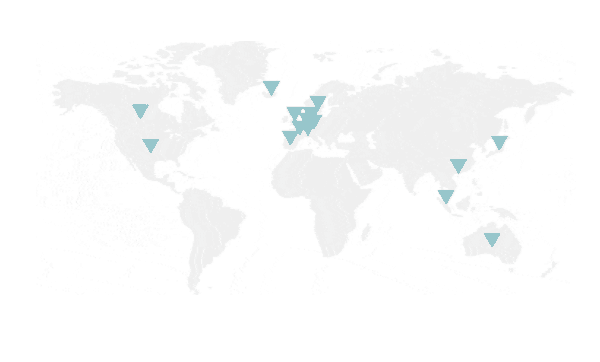 ProtonVPN is a new name in the VPN industry, and that fact is highlighted when you see their server count and global coverage. They have servers in 48 countries, and the total number of servers is about 568. However, these servers are really well scattered to cover almost the entire globe. Wherever you are, there is a ProtonVPN server near you.

The slight frown that you might have on your face when you learn about their server count and global presence will be wiped off the moment you connect to a ProtonVPN server. Their servers offer some of the best connection speeds we have seen.

Testing with UK and US servers, we were pleasantly surprised to see just how good their connection speeds were. If you use the service from within Europe, the connection speeds will leave you dumbfounded, since they are blazing fast. Testing it against IP and DNS leaks returned promising results as well. However, ProtonVPN did fail the WebRTC leaks test.

Things are made even worse with Netflix going on its own crusade against VPN users, blocking VPN IPs actively. There are some VPNs that help you access Netflix USA, but ProtonVPN isn’t one of them. You might be able to see the library and the US version of the website, but when you try to stream content, the infamous Netflix error message will sting you real bad. 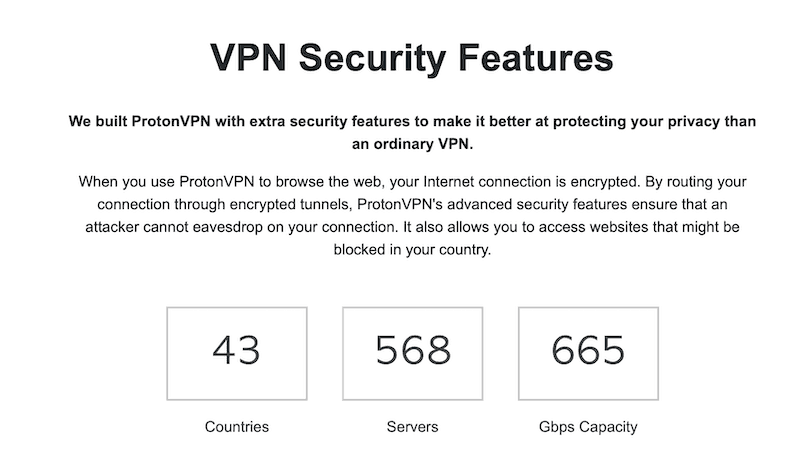 All VPN services aim towards providing users privacy and security on the internet, with the main focus on user privacy and anonymity. But ProtonVPN is different in that regard since it puts the security of users before privacy.

ProtonVPN maintains a strict no-logs policy. We were almost sure of it before we even checked the privacy policy since it is a product of the same people who produced ProtonMail, an encrypted e-mail service. There is nothing recorded about your online activity or data usage when you are connected to a ProtonVPN server.

The only thing that is recorded is connection timestamp, but the website clarifies that this is so that they can keep track of how many devices you are running the service on at the same time. Apart from this, nothing is recorded.

The fact that ProtonVPN is based on Switzerland means it does not have to worry about data retention laws either. So while there’s nothing the VPN service has on you, there’s also no pressure on them to record or share this information with third-parties.

A lot of people gauge the quality of a VPN service by the number of VPN protocols a VPN supports. Such people will be surprised to see that ProtonVPN supports just one protocol, which is OpenVPN. But the fact that it only supports OpenVPN shows how serious ProtonVPN is about protecting your privacy and securing your connection.

The website clearly mentions that no ProtonVPN server supports PPTP or L2TP/IPSec despite those servers being cheaper to maintain. As for encryption, you have AES 256-bit protection, so there’s no need to worry.

ProtonVPN offers a VPN client only for Windows at the moment. A MacOS client is soon to be out. However, you can setup ProtonVPN on a number of other devices and operating systems, including Linux, Android, iOS, routers, etc. There are detailed step-by-step setup guides to get ProtonVPN up and running on other devices.

The Windows client which ProtonVPN offers is one of the best you will see. Everything about the client feels just right. Whether it is looks, features, or performance; everything is of high quality. The dark-colored client has a pretty neat interface, with the home screen showing you all the important statistics and allowing you to switch servers using the pane on the left.

You can toggle secure connections with a button right on the home screen, and even use custom profiles or choose random or fastest VPN servers. Other features are neatly tucked in the Settings.

Customer support service is an important judging criterion for any VPN service. While ProtonVPN seems a bit off in this regard with no provision of live chat support, there is a detailed and well-updated FAQ section that can answer most of the questions the first time VPN users come up with.

In case you don’t find an answer there, you can always contact support by submitting an online ticket or contacting the support staff via email. You are sure to hear from them in a short time. Since all their personnel have a background in IT, the responses are always detailed and to the point and will help you resolve your issue quite easily. 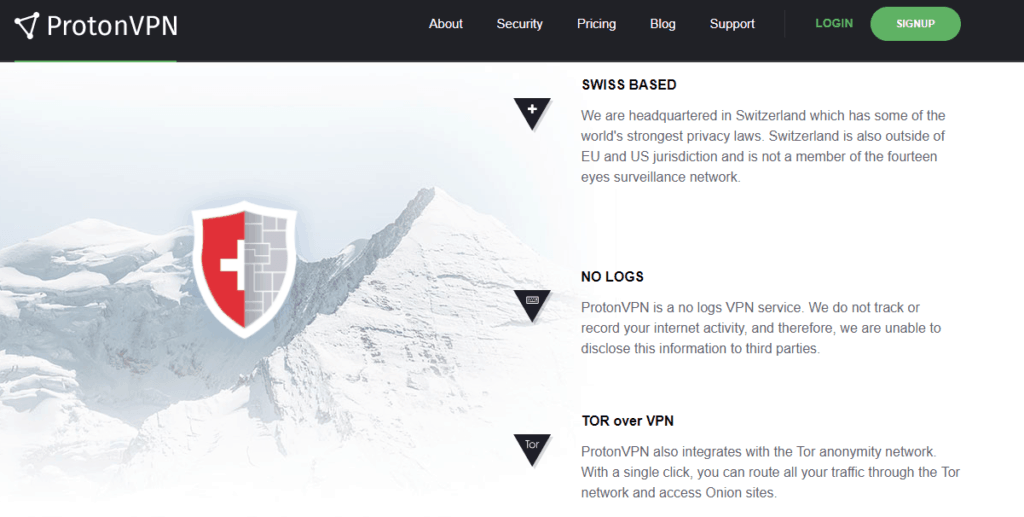 ProtonVPN offers extra protection to users in the form of Secure Core servers. These are special servers in Switzerland, Sweden, and Iceland that look to add an extra layer of protection on your connection. So basically you reach the target website after going through two VPN servers.

The secure core servers prevent network attacks and help you stay protected at all times. The best part of this feature is that your connection speeds do not suffer as such. So it’s added protection at no loss of connection speed.

When you use the Tor browser while connected to a ProtonVPN server, you can use the built-in support that ProtonVPN offers for Tor. There are certain dedicated Tor servers that make it safer for you to browse the internet using Tor. There’s always the possibility of someone using the exit nodes to target you in one way or another. But with the help of ProtonVPN’s built-in Tor support, you don’t have to worry about that.

P2P is a useful service for users all over the world. Although it is purely legal, there are issues when you download copyrighted material through the P2P service. This is why many countries ban P2P or torrent websites. A lot of VPNs do not support P2P, but ProtonVPN does. You can use P2P on most of the servers under ProtonVPN.

With VPN protection, no one can see your real IP address, meaning no one in the peer pool can know your identity and spy on your torrent activity. There’s also no way for your ISP to throttle your bandwidth, or for the authorities to take action against you for downloading copyrighted content since they won’t be able to see your torrent activity.

The Verdict on ProtonVPN Review 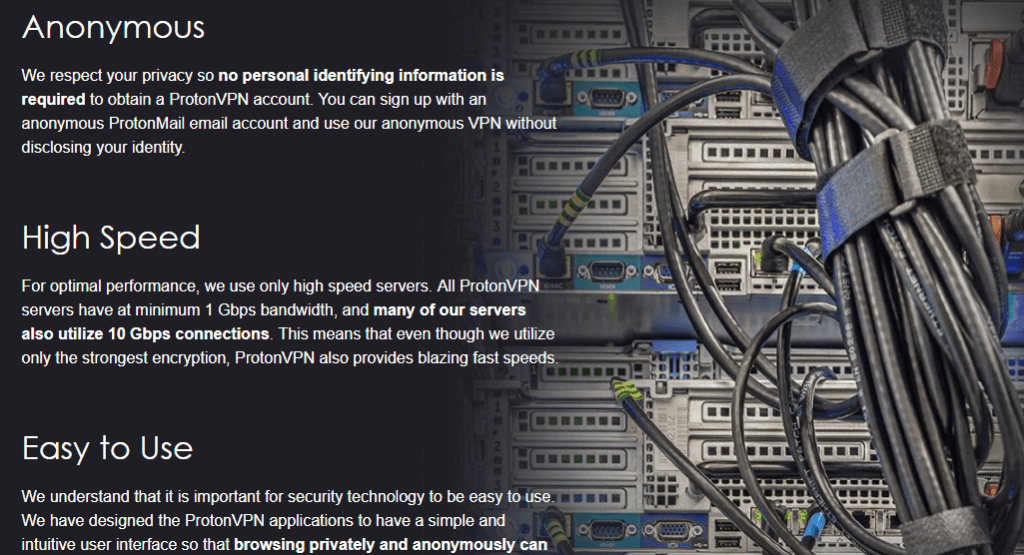 ProtonVPN is a new VPN service, but its different approach and style of operation has made it one of the most promising VPN names in the industry at the moment. Everyone is surprised by the performance of ProtonVPN.

Even though there are obvious issues to address, like the lack of VPN clients, a small number of servers, and no live chat, it’s a case of weighing the positives against the negatives. The fact that such discouraging factors are quickly brushed aside in the case of ProtonVPN shows how well it is doing with the things it provides.

The connection speeds it offers are unbelievable, even when you use the double encryption of Secure Core servers. The built-in support for Tor helps you browse the dark web securely. The no-logs policy and Swiss base keep your online activity private, and the P2P support an astounding 60-day money back guarantee to make you fall in love with the service on the very first day.