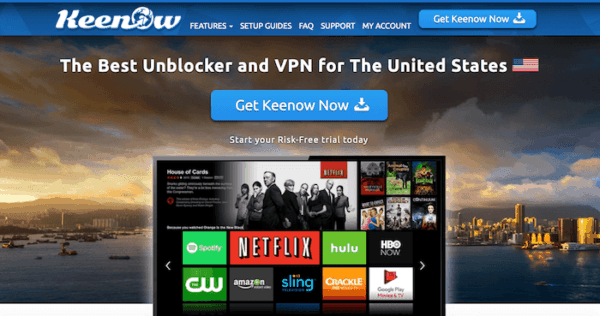 Keenow Unblocker is a relatively new contender in the ever-growing VPN niche. Is it just another VPN client, or a game-changer? Let’s have a look!

The first thing that you’ll notice about Keenow is that it is designed mainly to unblock online content – but don’t let it fool you – the service does include all the privacy and security features that you’ll find with more expensive and well-known competitors.

During our review, Keenow was able to unlock 10 different Netflix regions running HD playback without any issues.

Although Keenow does not have the same number of servers or locations as other players, our test did indicate that Netflix was successfully unblocked through the vast majority of the available servers.

The product is ideal for people that are serious about content unblocking – although it also incorporates all the privacy and security features of the ‘big guys’.

KEENOW UNBLOCKER ONE OF THE FEW VPN TO ACCESS NETFLIX, HULU, BBC IPLAYER AND MANY OTHER GEO-BLOCKED SERVICES

Here’s the thing – Most VPN users are not aware that there are more ways than using a VPN to unblock content online.

Keenow took an interesting approach – it incorporates both a Smart DNS and a VPN in one product.

Although we have seen the two services ‘bundled’ together with other products, Keenow is a truly Hybrid client. But before we go ahead – let’s discuss what is a Smart DNS.

In order to unblock content online, you need to route your Internet traffic through a remote server, which is usually located in the U.S. (also known as an exit point/node).
The main difference between Smart DNS and VPN products is the amount of traffic that you actually route through the remote server.

In most cases, VPN’s encrypt and route all your traffic – everything, including everything – through the remote server. We’re not talking only about network traffic from Netflix and Hulu, but also your Facebook, Google, Internet Banking, Skype, you name it – it’s all being encrypted and routed through a remote server.

That’s the main reason that VPN’s temper with your browsing speed, and also the reason that Google and other web services sometimes behave strangely when you use a VPN.

Smart DNS works in a different way – instead of routing all your Internet traffic, it routes just those parts that are related to online streaming – i.e. network calls Netflix, Hulu, Amazon Prime and more. Every non-streaming related web service (i.e. Facebook, Google) is connected directly, as usual, meaning that your day-to-day Internet speed is not affected at all.

We don’t want to get into too much detail (there are plenty of information out there), but the bottom-line is that Smart DNS can be kept on at all times without messing your Internet connection speed or having different websites (i.e. Google) suspecting you are a bot and giving you hard time.

App – Easy to use 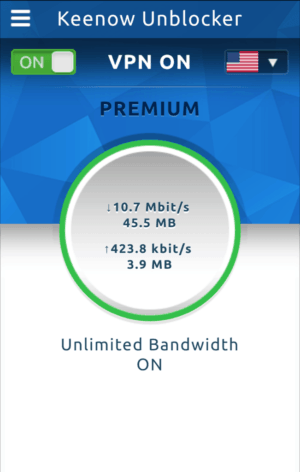 We’ll start with the bad news – right now, Keenow Unblocker has an app only for Windows.

It doesn’t mean that you can’t use it with other platforms – you can – but you will need to set it up manually.

On the positive side, the Windows app is extremely simple to use and is compatible with all versions of Windows, including long-neglected ones like XP and Vista.

The design is very minimalistic to suit users that are not tech-savvy at all. A toggle button on the top allows you to easily enable or disable the Smart DNS feature, while a button below allows you to connect to a VPN, or disconnects from it.

You can easily change countries by pressing on a country flag, which opens up a list of countries – which you can connect with Smart DNS or a VPN. 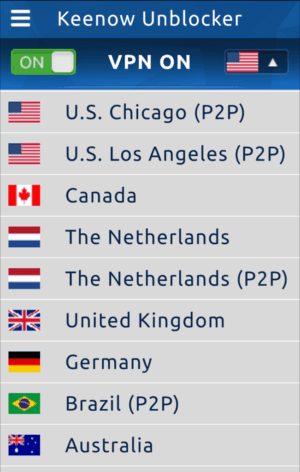 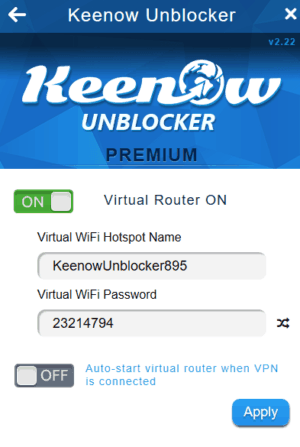 One of the most interesting features incorporated with Keenow is the Virtual Router option.

Some devices (i.e. Roku) lack the ability to establish a VPN or Smart DNS connection.

Keenow to the rescue – by enabling the Virtual Router feature, you create a new ‘virtual’ WiFi network, to which you can connect any WiFi-supported devices, let it be your Smart TV, Roku, PlayStation, Amazon Fire Stick, etc.

Once the device is connected to the virtual WiFi network, it has full access to the VPN connection, allowing you to unblock content. 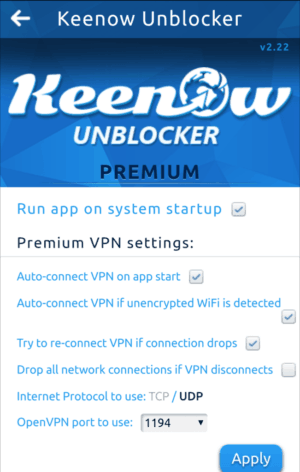 Fact is, not only that VPN clients route your traffic via a remote server, they also encrypt your traffic, which is pretty great if you don’t fully trust your Internet access point – let it be your ISP or a public WiFi network that you just found.

By encrypting your Internet traffic, no one between your VPN-connected device and the actual VPN server (exit point, as discussed above) can track your online activities.

The premium version of Keenow Unblocker incorporates a fully-featured VPN client, with advanced features such as IPv6, DNS, and WebRTC Leakage protection – features that should really be implemented by every DNS client out there, but sadly, even some major players overlook them.

The default encryption is weaker (Blowfish), but is very suitable for users that just want to unblock content. The Windows VPN client also features a ‘kill switch – which essentially would disable the device’s Internet connection in case that the VPN has disconnected for whatever reason.

The $9.95 and the $5.79 are essentially identical, just that the $9.95 plan is charged on a monthly basis while the $5.79 is charged by a yearly payment. In addition, the $5.79 plan includes a 30-day money back guarantee, whereas with the monthly plan all payments are final.

That being said, it’s really easy to upgrade from the monthly $9.95 plan to the annual $5.79 plan – and there’s really no risk.

Now, what’s about the $0.00 plan? Sounds too good to be true? Well, it probably is. The so-called Lite plan is free, but it only includes 512 MB of Smart DNS data per day.

It might not sound like a lot, but the fact is that with very few exceptions, Smart DNS does not consume a lot of bandwidth at all, and you can stream long hours of HD using Smart DNS and the free Lite plan. The catch? Netflix.

Ever since Netflix crackdown on VPN providers in early 2016, Netflix became a high-bandwidth consumption service even for Smart DNS services. The bottom line, unless you downgrade the quality, you can watch Netflix for about 10-15 minutes with the Lite version. Downgrading the quality might give you a hour+, but remember – the premium plan with unlimited bandwidth starts just at $5.79 a month.

Another issue with the Lite version is that it does not include VPN access, which means that it does not give you the security and privacy features which are available on the premium version. In addition, there’s no Virtual Router access (as the feature requires a VPN…).

The last thing to consider is that all recent Netflix apps use hard-coded DNS and IP addresses, overriding the Smart DNS setup. In other words, although the free Lite version works great unblocking Netflix for the web (i.e. www.netflix.com) on the browser, it’s really limited unblocking the Netflix app – and there’s nothing that you can do about it beside upgrading to the premium version.

In case that the $0.00 Lite plan didn’t convince you, Keenow Unblocker also offers a 30-day money back guaranee policy for the $69.50 12-months plan. Disappointed for some reason? Just open a support ticket and you’ll get a refund right away, no questions asked.

Both the Lite and Premium version features a great technical support with a quick professional response. In addition, there’s a great troubleshooting wizard on the support site, which allows you to spot and fix issues even without contacting the support team.

Although Keenow is relatively a new service, it includes all the features that can be found by tier-1 VPN services, and other features that you don’t see very often.

We see a great future for this product, considering the fact that it’s very reasonably priced, and the great features it includes.

We hope to see Android, iOS, and Mac OS apps coming up – from our understanding, it’s a matter of time until these are out.