As long as there was the internet, there was also online censorship, and its existence isn’t new. Depending on where you live, and also your online habits, you might not have even felt its effects that much. There are other people that have, and some of them are

Contents show
What Are Proxies, And What Do They Do
What Is Microleaves And What Does It Offer
What Deals Does Microleaves Offer
Dedicated And Shared Proxies
Automated Captcha Solving
Conclusion

There are other people that have, and some of them are losing access to more and more content every year due to new laws and legislation. This is becoming a huge problem in many countries, with the US, UK, China, and UAE being only some of them.

Older generations have lived their entire lives without the internet, and to them, problems like these might not be a big deal.

However, the younger generations know how much damage these restrictions might bring, and also how much the internet is important today, in the age of information.

Still, when problems like that appear, people tend to find a way around them, if they are unable to solve them in any other way. When it comes to restricted access, there’s also a way to bypass the issue, however, you’ll need to invest into certain tools.

This time, we’re going to talk about a proxy service called Microleaves. First, however, let’s see what proxies are, and what are their characteristics.

What Are Proxies, And What Do They Do

Proxies are online services that are being used in order to mask or hide your IP address. IP addresses are your online signatures, and they’re a true gold mine of information to those who know how to read them.

For example, IPs look like random numbers divided by periods. However, these numbers aren’t random, but instead, they can be used for revealing your exact location. You wouldn’t want that info to just be lying around, unprotected.

Another reason for masking your IP address, that’s also connected to your location, is accessing restricted content. Maybe you’ve heard about geo-restrictions.

It’s something that makes some of the online services and websites available only to people who live in a certain location in the world. A good example of this is Hulu, that can only be accessed from the US.

If you’re not within the borders of the US, and you go to Hulu, it will scan your IP address and extract the data concerning your location.

After it realizes that you’re not accessing it from the US, it will simply tell you that the service you’re trying to access isn’t available in your country.

However, if you use proxies, your IP address will be hidden, and instead, another will take its place. Basically, you’ll be able to trick Hulu into ‘thinking’ that you’re from somewhere else, and it’ll give you access to its content.

Now that we know what proxies are, as well as how they work, let’s return to the topic at hand, and see what makes Microleaves your best choice when it comes to choosing a proxy service.

What Is Microleaves And What Does It Offer

Microleaves is one of the largest proxy networks that you’ll find, and it’s definitely among the ones with the best quality when it comes to its services.

Their proxies have the speed that goes up to 1Gbps, they offer unlimited bandwidth, as well as several other features.

So that you can check out their service and decide for yourself whether you like it or not.

Microleaves themselves claim that they have one of the best support teams in the proxy industry, and from what we have seen, they’re not wrong. The support team can be contacted in case of any questions by sending an email, opening a support ticket, and there’s even an option to contact them by Skype.

Also, there’s a very nice FAQ section, and if you have any questions, doubts, or problems, you should probably first check there. FAQ can be found in the Support section of their website, along with the Helpdesk, as well as Privacy Policy.

There’s also a blog with several posts that include the explanation why are residential IPs the best, as well as those that explain everything that you need to know about:

When it comes to the proxies that this service offers, they’re guaranteed to work on pretty much every website you can think of. Also, they are locked to your own IP address, but there’s also an option to use your username and password authentication.

When it comes to setting them up, you don’t have to worry in case that you aren’t very skilled with this sort of tech. They’ll be set instantly, as soon as the service receives your payment.

What Deals Does Microleaves Offer

When it comes to deals, or packages, that the service offers, there are four of them:

Every one of these packages has its own features, so let’s see what they’re about, what they offer, and also what are the differences between them.

Backconnect Proxies are those that use HTTP, HTTPS, Socks4, and Socks5 proxies. They’re pretty fast, and Microleaves offers over 26 million IP addresses for this service. 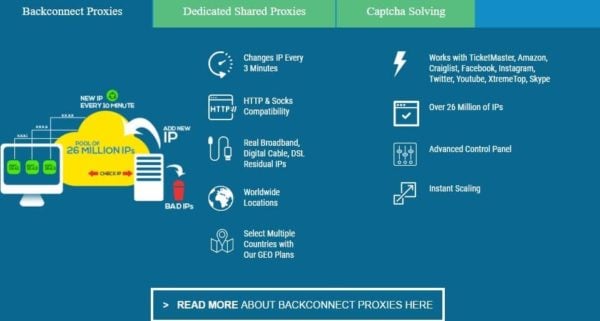 What’s special here is that these proxies can change their IP addresses, and they do so every 5 minutes, in order to keep you well hidden and protected.

They’re compatible with pretty much any software that supports the four earlier mentioned protocols, and you’ll be able to access literally any website online.

The millions of IP addresses that this package offers are connected to servers all around the world, which means that pretty much every geo-restriction can be bypassed with these proxies.

In fact, Microleaves even claims that they have an IP address for every city in the world, and with this package, you’ll be local in any place you can think of.

Also, you’re getting Microleaves’ guarantee that their IPs are never detected as those of a proxy’s, so you won’t be in any danger of being discovered.

You can even choose a number of proxies that you can have in your package, and there are already prepared deals waiting for you, each for their own price, of course.

We have decided to put these two together since both of the packages are almost identical. The difference between them is that Dedicated Proxies are only used by a single client, and the Shared Proxies can be shared by a group of 5 or fewer members at the same time.

Other than that, these two packages are, as we said, almost exactly the same. They both offer:

Both of these have tens of thousands of IP addresses at their disposal, they offer instant scaling, they aren’t detected as proxies, and they start almost immediately, with regular integration taking no more than 2 minutes.

Also, they’re described as highly reliable by many of their users, and they also offer different numbers of proxies per package. Once again, the price may vary depending on a number of proxies, but that’s only natural, given the fact that they’re providing a top service.

Last but not least, we have an automated captcha solver for $10, which is a handy little tool if you’re constantly running into captchas, and you’re losing patience due to their stubbornness.

It works by using the best quality OCR, which is a software that allows you to convert different types of documents (PDFs, scanned paper docs, and even images) into searchable and editable data.

With this tool, you won’t have to deal with captcha again, and every one of those obstacles will be solved in about 0.7 seconds.

As you can see, the deals that Microleaves offers are more than alluring, and with only a few clicks, you can have access to pretty much anything online.

And of course, let’s not forget the fact that your security is also enhanced, due to the fact that the IP that you’ll be showing to the world won’t be your real address at all.

It’s definitely worth it, and Microleaves is guaranteed to work for your purpose.