December 14th, 2017 will be remembered as a dark day for internet users worldwide.

The US Federal Communications Commission (FCC) on Thursday voted 3-2 to repeal net neutrality rules that had been installed during the Obama administration. These Net Neutrality rules forced ISPs to treat all data passing through to its consumers in the same way, and this prevented them from blocking or slowing some internet services.

The result of this obliteration is that if you live in the US, your ISP can decide that your movie stream won’t work smoothly. This is by throttling your internet whenever you try to stream. Further, they now have the freedom to charge higher depending on your internet usage.

For example, if you use YouTube a little too much, they may soon decide to bring you some ‘YouTube charges.’ The move only serves to cement the positions of larger ISPs, thanks to FCC chairman Ajit Pai, who was also a former Verizon employee.

This brings us to the big question: What’s next?

Lawsuits, protests, and debates will be coming in handy, and there’s bound to be quite a lot going on around this issue in the coming months. However, what can we do to combat this as netizens?

As consumers, the only tool we can turn to is a good VPN.

VPN companies have already been vocal on this matter and expressed their views. VPN provider IPVanish described the FCC Chairman Ajit Pai as a person “proven to make decisions only at the behest of broadband conglomerates.” They further added that his actions were a “blatant condescension and disrespect towards the concerns of citizens in the face of his role.”

In a statement, Harold Li, Express VPN’s Vice President said that the decision “strikes at the very heart of the free and open internet.” He, however, adds that Americans “won’t take this lying down” and “will continue to hold both the government and ISPs accountable for continuing to uphold the principles of net neutrality”.

How can VPNs bring back Net Neutrality?

Normally, a VPN encrypts your traffic and tunnels it through one of its servers, only giving away too little for the ISP. This way, your ISP won’t know what you are doing with your internet connection. They won’t know whether you are reading about VPNs and Net Neutrality on Anonymster or whether you are streaming Stranger Things from Netflix.

The ISP will therefore not throttle your internet connection. This makes VPNs an excellent way of combatting moves by your ISP to end net neutrality. Further, using a VPN will help you enhance your general privacy, and prevent your ISP from analyzing your personal internet habits and selling the data.

However, choosing the right VPN is vital for your internet freedom. You will need a VPN that is dynamic enough to refresh its IP addresses in case an ISP decides to block its IP addresses.

Best VPNs to Combat the Repeal of Net Neutrality Rules

We have carefully chosen for you the best VPNs to use to maintain net neutrality on your side. Here are the top 5;

Express VPN is one of the biggest names in the VPN industry, and its well known for its top-notch services and excellent customer support. The VPN features 1700+ servers in 136 cities distributed across 87 Countries in 5 continents.

Express VPN is going to be one of the key players in fighting the repeal of net neutrality policies due to their commanding reach in the US. This has been made possible by their excellent services with high speeds and no-log policies that ensure that you remain private throughout the use of their service. The VPN has a 30-day money back guarantee so you can give it a try. Read the Full Review Here.

CyberGhost is one VPN that has hugely grown in popularity over the last few years to become one of the top VPN services.  The VPN has a total of 1250+ servers in 29 different countries, with a whopping 219 servers in the US! This means that the US servers won’t get clogged with traffic anytime soon, and therefore your connections will always be fast.

One of the strong points of Cyberghost VPN is that it is based Romania, a country known for its dislike for data retention laws. This plays a huge part in making CyberGhost a complete no-logs VPN provider. Its connection speeds are great and depending on your connection, you can even get a speed boost! You can take advantage of their 30-Day Risk-Free money back guarantee to test the service. Read Full Review Here.

IPVanish is the only top-tier VPN in the market, and 2017 has been an incredible year for them. The consumer base has started realizing the greatness of IPVanish and has helped grow to become one of the top 3 VPNs of the year. Being top-tier, IPvanish owns and operates the whole of their private network and infrastructure. They also control their app and server software development inside, as well as managing their DNS services and customer support.

This greatly helps them in implementing a zero traffic log policy. The VPN has 40,000+ shared IPs and 950+ VPN servers across 60+ countries. The North, Central, and South America are well covered, and their servers provide greats speeds for HD streaming. You can take advantage of their 7-day no questions asked money back guarantee to try out their service. Read Full Review Here.

NordVPN is an easy to use VPN that is also fast. It has an incredible 2380 servers located in 56 different countries across the world. Out of these, 860 servers are located in America. This alone tells you the dedication that NordVPN has in making American connections seamless. The VPN providers usually are concerned about ISP throttling and are always keen to fight this habit that has even been worsened by the arbitration of net neutrality.

NordVPN guarantees you maximum security and privacy with their IKEv2/IPsec protocol that employs a robust cryptographic algorithm. To help you cover your whole family, they provide up to six simultaneous devices using a single subscription. They have an hidden 3-day trial hidden in the FAQ section under “Billing & sales questions”. There is also a 30-day money back guarantee to let you try the service. Read Full Review Here. 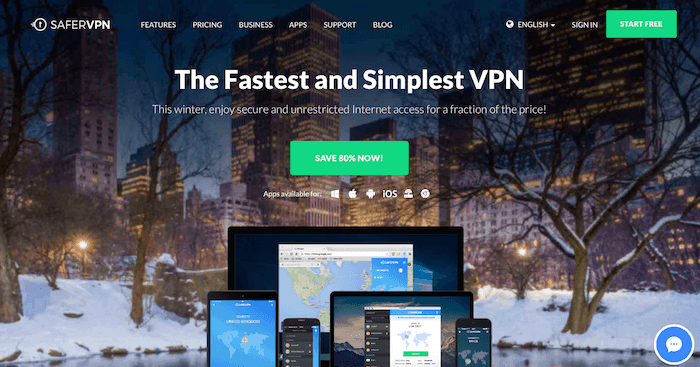 SaferVPN only started its operations in 2013, but it has been one of the most promising VPNs in the recent past. It already has over 700  servers in 34 countries to its name that allows you enjoy unlimited access online. The VPN has tried as much as possible to learn from the mistakes of other VPNs, and it seems to be getting everything right.

SaferVPN is based out of Tel Aviv, Israel. This location plays a significant role in ensuring that your online identity and activities will always be protected. SaferVPN is one of the few VPNs that entirely permit P2P, and they also offer a connection of up to 5 simultaneous devices. You also get 24/7 customer support and a 30-day money back guarantee. They have a free full-day trial that you can also use to try the service. Read a Full Review Here.

Net neutrality is now almost a thing of the past in the US. ISPs will try to take advantage of this and though they may try to throttle internet speeds of users connected to particular IP addresses associated with VPN servers, this won’t be practically possible as so many corporates use VPNs.

Even if they try, there are millions of IP address that VPNs can utilize to stay ahead. The above list of VPNs is a selection of the best VPNs to restore most of your net neutrality. We are yet to see where the court cases that have already been filed will take us, but meanwhile, we have to use a VPN!