Nobody likes restrictions, and in today’s world where we’re basically constantly connected to social networks, and Facebook most of all, blocking them can be extremely annoying. If your social networks are blocked, the reason is always location. And the responsible parties are either your government or your school or college. Some governments, like China’s, or UAE’s simply don’t tolerate some of the online content, and that’s that. On the other hand, your college or school usually blocks social networks and media in hopes of increasing concentration. Either way, it’s blocked, and that’s a problem for you. In order to help you choose the best one, we’ve prepared this guide, in which we’re going to explore several VPN providers and see which is the best VPN for Facebook.

Most of the time, as we said, Facebook and similar websites will get blocked by the government or the owner of the internal network at your school or college.

One of the most secretive countries in the world, they barely have any internet access at all. The little access they do have is used for posting birthday messages. Professors and some of the students from Pyongyang University of Science and Technology do have access, but they actually choose not to use it.

Social networks are really hard to get access to in Iran, and Facebook was even banned completely in 2009. When it comes to Twitter, the situation is a bit better, and even the President Hassan Rouhani has it. Despite this, it would seem that he himself isn’t the one writing the tweets. Anyway, accounts can be accessed only via a proxy server, which makes it banned for most who aren’t that skilled with manipulating the web.

You might have heard of the Great Wall of China. Well, even though it has much historical value and it’s one of the most favorite tourist attractions in the world, it’s got nothing on the Great Firewall of China. This is a Chinese government’s censorship project, and it’s quite a serious force. Facebook is it’s greatest online enemy, and they’ve banned it in 2009, believing that’s being used by an activist group for communication and plotting against the government. The ban was lifted in 2013, but only for the 17-square-mile trading zone in Shanghai, because of foreign investors. The rest of China still doesn’t have access.

When it comes to Cuba, Facebook isn’t officially banned, but despite this, it’s still very hard to access it. Medical students, politicians and several journalists are the only ones who can legally access it from their homes, but the rest of the people have to go to internet cafes. Even though this doesn’t seem to be that bad, we should mention that the hourly internet cost in these cafes is $6-$10, while the average salary is only $20. Which makes the internet available, but also insanely expensive. And also, this cost doesn’t even give you a good speed, since it takes entire minutes to load the regular page.

Bangladesh has banned Facebook in 2010, after the satirical images of government leaders, as well as the Islamic prophet Muhammad, were shared on the social network. One man was arrested, and the government charged him with insulting the leaders of the country and spreading malice. The ban lasted a week until the images were removed, and ever since then, the strong surveillance was constantly present.

Egypt has faced a strong ban in 2011, after an attempt to overthrow their president. Many social networks and other websites were banned, including Facebook, twitter, Hotmail, Youtube, and even Google itself. Not even an access to proxies was possible, but the ban was lifted after several days.

Facebook was blocked in Syria in 2007, in fear that’s being used by activists, but the president allowed it again in 2011, hoping to prevent public unrest. Despite the ban, everyone with a proxy could have still easily access it.

The entire country was instantly banned from accessing Facebook in 2007 after it was discovered that someone has made the fake page and claimed to be the Prime Minister of Mauritius, Navin Ramgoolam. Fortunately, the ban was lifted on the very next day, and now, it seems that he actually does have his real account.

A similar situation to the one in Bangladesh, Facebook got banned because of the discovery of a page created for the competition that included submitting drawings of the prophet Muhammad. This resulted in an instant ban, that was lifted after two years, but some pages are still blocked, and will remain to be until the drawings are removed.

Back in November 2009, Facebook users in Vietnam reported an inability to access the site. The government was blamed for blocking the website, however, they denied any accusations. Facebook is still difficult to access even today, and for those who manage to do it, there’s a strong censorship that’s blocking some of the online content. An example of this is the total ban when it comes to accessing news or posting any links of news websites.

Having social networks blocked and learning facilities might seem a bit extreme at first, but their main aim is to prevent students from hanging out on Facebook during classes and missing the entire lectures in the process. They’re trying to achieve the best working (learning) conditions as possible, and one of the aspects of that process turned out to be the content restriction. Even though we understand if this is done at school that the children are attending, it seems a bit unfair towards college students, who may still be in school, but are now grown people in the eyes of the law.

As we said, the VPN is the way to go if you wish to get back your right to access online content like Facebook. You’ll want a provider that offers several protocol options, as well as affordable monthly price, and so we came up with the three best ones: 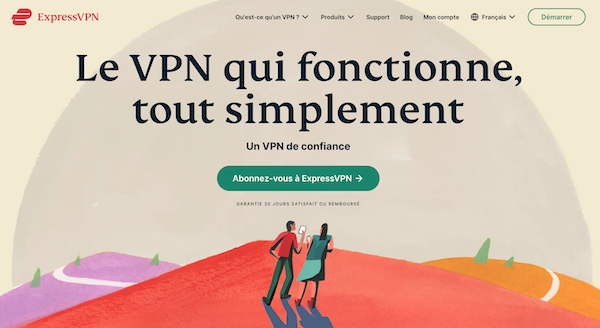 This is one of the best ones that you can find to unblock Facebook. You don’t have to worry that it’ll be too complicated and that you won’t be able to find your way around since it has an extremely user-friendly software. The setup is pretty simple, even if you’re completely new to the world of VPNs.

It offers many different features, including one of the best customer services you’ll find, with a non-stop support that’s available via both, chat and email. If you decide to go with an email, the response will arrive in 30 minutes or less. ExpressVPN also has a money-back policy that lasts for 30 days. That means that you have a month to use it, and if you’re unsatisfied at any point, you’ll be able to cancel the deal without any penalty.

The software is compatible with all of the operating systems, including Windows, Mac OS, Android, Apple devices, and Linux. The encryption it uses is strong, and you won’t find a better way to protect your data than this VPN.

If for some reason, you don’t like ExpressVPN, or can’t access it, your next best choice would be IPVanish. This one is also available on multiple devices, and it’s great if you want to provide your entire family with private browsing sessions.

Customer service is also great, and available 24/7, though a bit slower than the previous one. However, it is compatible with almost every device like the ExpressVPN. On the other hand, the IPVanish offers the greatest speeds in the VPN world. The money-back policy stands, and the security is decent enough. Even though there aren’t as many security protocols as you’ll find on ExpressVPN. Luckily, this increased speed makes it great for streaming, downloading and alike.

HideMyAss VPN has a pretty large network and many servers, as well as a few other perks that you can find on ExpressVPN. The connection speed is good and you’ll get unlimited bandwidth specially in case of streaming.

The software is user-friendly and easy to use, also the customer service is always available. Even though many have reported that it’s pretty slow, and some have even complained about it being unhelpful and even frustrating. The good news is that it’s compatible with all of the operating systems. The cost can be just affordable alongside practical apps and configuration guides.

Since pretty much everyone we know is on Facebook, and we’ve already gotten used to it being our primary window into the world, Facebook is needed. That’s a fact. It has grown into the part of our lives, and it’s not only a social network anymore. But the way we get information, stay in touch with friends and family, the place where we store our memories and the place where we can express ourselves.

This is why you need access to it, and we get that. However, you also need to make it secure and ensure your safety, privacy, and security of your information. That can be achieved through the VPNs, and with the ExpressVPN clearly being the best VPN for Facebook in the bunch. We strongly recommend you get it and get rid of that worry, at least.